Harry Potter is such a Rotter

Potter, Harry Potter, are you sure that it’s so,

His title, that label, or are you having a go,

At me, your poor servant, a man dearthly low?

Harry – oh she is a Rotter

A FREE eBook at amazon.com

Harry Potter and the Cursed Child

Potter, Harry Potter, are you sure that it’s so,

His title, that label, or are you having a go,

At me, your poor servant, a man dearthly low?

Harry Potter is such a Rotter

Harry Rotter, for sure.

Posted by The Crazymad Writer on August 3, 2016 in Harry Potter, Harry Rotter

Harry Potter and the Cursed Child

and the Cursed Child

Read Harry – oh, she is a Rotter, instead. 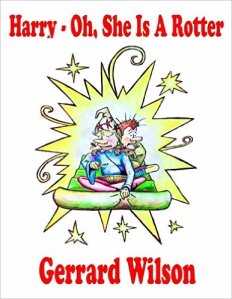 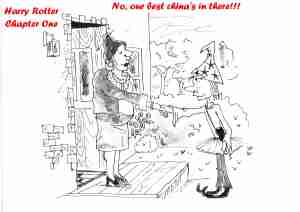 Posted by The Crazymad Writer on March 5, 2015 in fantasy story, Harry Rotter

From the story  I wrote, ‘Harry Rotter’

You may think I’m not too serious, and I might even agree, 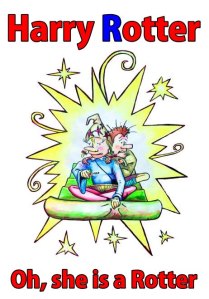 where you can purchase my eBooks

I DON’T CARE WHAT YOU CALL ME

AS LONG AS YOU ENJOY READING MY STORIES.

Posted by The Crazymad Writer on November 28, 2013 in Harry Potter, Harry Rotter, Stories for children, The new Roald Dahl

Mr. and Mrs. Privet, of number twenty-three Dorsley Drive, were anything but normal. They had been normal only a few weeks earlier, but they were now as crazy as anyone fortunate enough to have been incarcerated in the local loony bin.

On the outside, Mr. Privet, a tall, bald and incredibly thin man, appeared quite normal, but just beneath the surface, barely hidden, he was a seething mass of nervous ticks, idiosyncratic behavior, peptic ulcers and, above all, just plain loonyness.

As well as suffering from the same mad ways as her loopy husband, the extraordinarily fat Mrs. Privet was also suffering from the dreadful infliction of hearing voices in her head. She might hear them at any time of the day or night, and would oftentimes jump up in bed screaming in a most alarming way, giving her husband such a fright he’d begin shaking uncontrollably. It was a most dreadful state of affairs altogether. Despite suffering from these awful conditions, Mr. and Mrs. Privet tried to continue living as normal a life as was possible, but hardly a day went by without one of them experiencing a mad interlude that would make most normal people simply roll over and die.

Before I continue on with my story I must also tell you about their son Box, Box Privet. This child (the veritable apple of their eyes) was, like his father, of a tall and incredibly thin physique. At times this trait would cause him to be the butt of jokes and jibes by his classmates and acquaintances. However, he paid little or no attention, because his mind was always set firmly on the love, the passion of his life – electronics. Upstairs, in his small bedroom, Box would work for hours on end with his soldering iron, long nose pliers and tweezers creating, crafting bringing his new ideas to life. It was a lonely existence, but it suited him fine.

I have already told you how Mr. and Mrs. Privet had been quite normal only a few weeks earlier. In all truthfulness the Privet’s had been one of the happiest families in their entire estate of mock Elizabethan detached houses. But now they were mad, living in fear for their lives, the happy and contented existence they had so enjoyed in tatters, a shambles, and a shadow of what it had once been.

You see, the Privet’s had been hiding a secret, a big secret. And while it had been contained and suppressed, as they felt is should still be, they had been enjoying that happy and contented life, but from the moment, the very instant this secret, this terrible secret had escaped from its place of incarceration, a private boarding school going by the name of Hagswords,  it had come to an abrupt end.

This secret, this big dark secret was in reality a young girl, an orphan, the Privet’s only niece, going by the of Harry Rotter. She had actually been baptized Harriet, but from an early age had insisted that everyone call her Harry.

Let me tell you about Harriet – Harry… She was the boldest, cruelest, nastiest child you could ever be unfortunate enough to meet. To look as her, with her flowing locks of golden hair and a face that appeared so innocent, so angelic, one might easily be fooled into believing that butter could last forever in her mouth without melting. But she wasn’t an angel, no, the unfortunate truth, the terrible truth was she was an out and out scoundrel, a bully who had no respect for anyone but herself. Bullies can and so very often do make the lives of those living around them as miserable as hell – Harry proved to be no exception to this rule.

While Harriet – Harry – had been safely tucked away in her school everything had been just fine, and the Privet’s had been able to forgot about their troublesome niece, but from the moment she broke out, escaped from that high security ‘special’ boarding school, and found her way to the home of her only living relations, the Privets, their lives changed forever.

“Excuse me, please,” said Harry ever so mannerly, when Mrs. Privet opened the front door, to her, “I am your only niece – will you please put me up for a few days?”

“Its young Harry Potter, isn’t it?” said Mrs. Privet, patting her on the head. “Are you on your end of term break?”

Ignoring the question and resisting the urge to kick the condescending woman in the shins, Harry smiled, and said, “I prefer to be called Harry, if it all right with you?”

“Yes, yes, that’s fine,” said Mrs. Privet as she ushered her through the doorway, while  looking along the road to see if anyone had been following her. The road, however, was deserted.

“Please go into the front room,” said Mrs. Privet. The cat made a mad dash out from the house just as the door closed.

Harry entered the room. It reminded her of Hagswords – far too much stained glass and wood paneling for her liking. “Sit down, sit down, Harry, and make yourself comfortable,” said Mrs. Privet. “I will go fetch you some lemonade, you must be so thirsty after so much travelling. Then I will go tell your uncle the good news.”

Leaving Harry alone in the room, Mrs. Privet returned to the hallway where she opened the small door under the stairs that led down to the cellar. Calling her husband, she said, “Dear…. we have a visitor…”

“Who is it?” a voice called up from below.

BANG. There was a sound like a bald head striking a beam in the low ceiling, and then there was silence.

“Did you hear me, darling?”

Mr. Privet began speaking, and in a hushed voice, he said, “I’m busy… Are you sure it’s our niece – THAT niece?”

“Harriet or harry – you should know what sex they are!”

“He, she’s a girl, she just likes the name Harry, shortened, you know.”

“I don’t know if I know anything anymore,” Mr. Privet grumbled as he began making his way up the narrow staircase, “having to deal with your ‘unusual’ relations. Puffing and panting, Mr. Privet emerged from the cellar. “Where is she, then?” he barked, looking up and down the hallway.

“I put her in the front room.”

“Our best china’s in there!” he hollered.

Posted by The Crazymad Writer on November 21, 2013 in Harry Potter, Harry Rotter, humor, Stories for children, The new Roald Dahl

Secrecy, at Any Cost

“Hmm, what is it?” he sleepily replied.

“What time is it?” Box asked, while rubbing his eyes.

“Half past six, are you sure?” Box asked, unwilling to believe that even she would consider awakening him at so early an hour. Reaching for his glasses on the bedside locker, and then grabbing hold of his watch, Box looked at it, and saw that it was indeed that time.

“Yes, I am sure of it,” said Harry, though louder this time. “Are you getting up or do I have to send off for that snake, again?”

Remembering the snake, and what it had done to him, Box jumped out of bed, and said, “I am getting up – I really am!”

Or should that be Merry Princessmas?

Merry Christmas and a Happy New Year from the Crazymad Writer

No, Our Best China’s in There!