I am Gerrard T Wilson, The Crazymad Writer of children’s stories.

Although my works are primarily aimed at children, adults can and, indeed do,

read them with as much interest and excitement. I like to think that my work

has a universal appeal, spanning the generations, the sexes and even the

continents. I have written so many stories, including ‘Tales of the Extraordinary’

‘Fizzy Cherry Cola’, and ‘The Witches’, also ‘Forget the Celebrities –

crazy-mad life), ‘Alice in Wonderland on Top of the World’ (a follow on story

to Alice in Wonderland, and Through the Looking Glass), ‘HARRY ROTTER

(she’s a girl and a bad one at that), and ‘Jimmy, the Glue Factory and Mad

(my own unique slant on some familiar rhymes), ‘My CRAZYMAD Poems’

(a collection of strange, oddball, oftentimes bizarre poems, including

(a Troll whose idea of a having good time is eating empty cigarette packets!).

You will also read about ‘Fle’ (an extremely old elf who lives in a fertilizer mine),

‘Fairy Tales’ including ‘The Three Faerie Sisters’, the ‘Little Brown Frog’, and

‘A Christmas Story’. Next up is ‘God, dog and Beelzebub’ (what (what on earth

can that be about?), ‘Greengrocer Jack and the Talking Cabbages’ (trying to stop

a giant Yam from taking over the world), ‘Poor Jane’, and ‘A Punt across the

Thames’ (I almost drowned that day!). Last, but certainly not least, I also

Instead of giving your child that extra toy for his or her birthday, a book is a

far better option. Preferably one of mine, I am sure they will treasure it long

after their toys are abandoned at the back of that dusty old wardrobe.

I may not be Roald Dahl…

I may not be Roald Dahl, J K Rowling, Darren Shan or even Derek Landy,

but I am The Crazymad Writer – and proud of it, to boot. 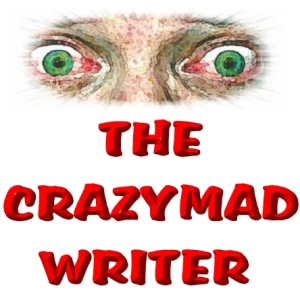 Posted by The Crazymad Writer on October 3, 2014 in Roald Dahl

That, that’s all, folks!

It is waiting there patiently until you arrive,

And when you get there, you will feel SO ALIVE.

Posted by The Crazymad Writer on October 3, 2014 in Popeye

Eleven people were hanging on a rope, under a helicopter.

The rope was not strong enough to carry them all, so they decided that one had to leave,

Because otherwise they were all going to fall.

They weren’t able to choose that person, until the woman gave a very touching speech.

She said that she would voluntarily let go of the rope, because, as a woman,

she was used to giving up everything for her

husband and kids or for men in general,

and was used to always  making sacrifices with little in return.

As soon as she finished her speech, all the men started clapping…

Posted by The Crazymad Writer on October 3, 2014 in humor, humour

It is waiting there patiently until you arrive,

And when you get there, you will feel SO ALIVE.

Posted by The Crazymad Writer on October 3, 2014 in Austin Princess