RSS
← On Christmas morn, before the dawn…
Christmas Pud, it sure tastes good! →

These creatures – Christmas Giants – reside quiet and unseen, throughout the entire year, in people’s houses. They rest, slumber peacefully away in their places of concealment, until they are needed, when they are summoned, called by the old man himself, Father Christmas.

Yes, I know this has previously been done by Father Christmas. It’s just that, with modern building practices adopting ever thinner chimney flue designs, the old, and rather fat man, simply cannot get down them anymore. You see, the Giants, as well as being ever so tall, are incredibly thin. Passing up and down a chimney each Christmas Eve is child’s play for them. It’s a delightful task they volunteered for, when the old man began to get into difficulties with this new style of chimney design.

A note: If you happened to look for one of these creatures in your house, at a time other than Christmas, you might notice a large foot poking out from under your bed, or a long and incredibly thin finger half-hidden to the rear of a cupboard. Don’t be worried, it will not wake up, though, not until not until next Christmas Eve, that is. 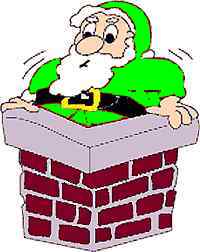 ← On Christmas morn, before the dawn…
Christmas Pud, it sure tastes good! →